Sort by Popularity
24 Per Page

Products to help you grow healthy and high yeilds of grass. Our products help you with all your grassland needs.  The major products are herbicides to control docks, thistles, nettles as well as other broad-leaved weeds.  If you can't find the product you need then please just give us a call on 01543 728813 and we will find it for you.

Controling weeds - whether by cultural or crop protection products, is a very important part of managing your grassland. Controlling  your weeds should improve the yields of your forage, its quality and the longevity of it. However, a professional approach is crucial  both to maximise the level of weed control and also to protect the environment.

A perennial plant that flowers from May to September, it propagated from creeping root stolons. Buttercups are generally avoided by livestock due to their bitter taste but can cause stomach irritation if digested. Controlling buttercups improves pasture palatability and productivity and can be done through pH of the soil or soil structure and drainage.

An annual broadleaved weed that propagates by seed in the soil, it is commonly seen in autumn reseeds after a cereal crop. Chickweeds needs to be controlled as it will compete aggressively with the grass, affecting yield, particularly in new leys. It can also cause problems in the conservation of grass, affecting wilting, fermentation of silage and drying of hay. Heavy grazing of young stock can graze it out. Can cause digestive issues on older livestock.

A deep tap rooting perennial plant, flowering from May to October. It propagates with seeds via wind dispersal, with one flower head producing approx. 400 seeds. Dandelions will compete with grass and affects palatability and yield. Improving soil fertility and avoid overgrazing to reduce risk.

Deep rooting plants that compete aggressively with grass, they can also regenerate shoots from their tap roots. Their seeds can remain viable for up to 80 years. Docks thrive on intensively used and highly fertilised areas and should not be allowed to set seed. Neither intensive grazing, ensiling, or topping are ideal methods of control. As the seeds can survive both digestion and ensiling and the tap roots can allow the plant to recover after topping.

Growing to 1 meter high, they propagate through extensive creeping stolons and can easily germinate from soil disturbance.  Nettles are unpalatable, and with their ability to spread across a field and reduce grazing area. They are best controlled when they are young, with cutting three times a year before flowering.

A biennial plant, that flowers in its second year. Ragwort is poisonous, but unpalatable in its living state. Once the plant has been damaged, wilted, or dead, it becomes more palatable and still as poisonous. Horses are particularly susceptible, and it is a danger in hay or silage. Grazing with sheep in the early spring or winter can help reduce light infestations, or uprooting will help prevent spread of seed. Cutting is not a recommended option.

Spreading through vegetative growth of roots, seeds are also dispersed by the wind. Thistles have extensive underground roots so can be difficult to control or remove. Topping can be useful to ensure that all the plants are at the same height.

Herbicide use for some difficult grassland weeds

Ragwort -  Control of ragwort by cultural and husbandry methods can only be partially effective. The phenoxy hormones 2,4-D and MCPA as Headland Polo/Nufarm Lupo, (Table1) offers the best control of ragwort but this needs to be a targeted
programme applied at the rosette stage and again before flowering in the second year. Forefront T has ragwort on the
label but has restriction for use and would be more expensive than traditional phenoxy herbicides,. Ragwort is very dangerous to stock if grazed, ensiled or incorporated into hay during die back following herbicide application. As mentioned earlier in this technical note, ragwort becomes attractive to stock as it senesces.

As an alternative to the phenoxy hormones for ragwort control it is possible to spot treat small populations using citronella oil as Barrier H. Citronella oil is a non-toxic natural oil and is best applied at the rosette stage, although can be used up to flowering . Ragwort foliage is totally killed after application. It is spot treated as grass is also damaged.

Docks -  In newly drilled pasture, docks readily establish from seed within the seed bank, contaminated hay, silage or straw or can re-establish from sections of root stock following cultivation. The choice of herbicide control for seedling docks in newly drilled pasture depends on whether clover is part of the seed mix and timing of herbicide. The options are greater on grass with no clover and on grass more than one year old. On a grass+clover mix in its first year, to control seedling docks, the best option is a 2,,4-DB + Headland Triad tank-mix. . For a more specific dock herbicide with clover safety then Squire Ultra is also an option on young grass. Where no clover is present in the mix then the options are wider and include MCPA+Mecopropp+Dicamba combinations (Tables 1) or Starane/Pastor.

On grass more than one year old there is a wide selection of herbicide options depending on the use to which the grass is put and whether clover safety is required and the presence of other perennial weeds such as creeping thistle. Many of these
solutions are described in Tables 1 & 3. In essence where clover safety is required use Squire Ultra, where clover safety is not required then there is a choice of phenoxy hormone combinations such 2,4-D + MCPA/Mecoprop-p/Dicamba or the pyridines such as Pastor and Doxstar. For optimal control of established docks in young grass, or in
permanent pasture, apply the herbicide early at the rosette stage in the spring or autumn post grazing or cutting. The pyridine herbicides although more costly will generally give longer and more persistent control than the phenoxy hormones.

Thistles -  As with docks the choice of herbicide depends on whether it is seedlings thistles in new re-seeds or established
thistles that are being targeted. The choice is between the phenoxy hormones and the pyridines herbicides and also
depends on whether clover safety is required. On new re-seeds where clover safety is required, then 2,4-DB will control seedlings of both spear and creeping thistles. Where clover safety is not required on young grass, then Pastor, although more expensive, will control seedling thistles. The choice of herbicide for thistle control in rotational and permanent pasture is between the old inexpensive hormones 2,4-D , MCPA and dicamba alone or in mixes, or the more expensive pryridine combinations that will give longer and more persistent control; i.e. those based on clopyralid+fluroxypyr/triclopyr (Pastor/Thistlex/Forfront T). The choices are shown in Tables 1 and 3.

Rushes - MCPA and 2,4-D, either as straights or better in coformulation, provide the best control of rushes and should be applied when they are actively growing from May to early June. The alternative is to treat the re-growth after cutting. It may also be possible to use a weed wiper with glyphosate if the sward contains valuable clover. For example, the Rotawipe is a trailed or tractor mounted weed wiper that may be used for rushes, ragwort and docks or the new Contact 2000 weed wiper from Logic. Ideally herbicide control of rushes should also be part of a concerted effort to improve drainage.

Gorse (Whins) and Broom - While cutting and burning are the usual methods of control unless the roots are removed and the
soil fertility improved gorse will re-grow. Treating the stumps directly, or re-growth through a hand lance/knapsack with
Grazon Pro, (fluroxypyr + triclopyr), or alternatively glyphosate is usually effective. Note Grazon Pro may only be used between the 1st of March and the 31st of October. 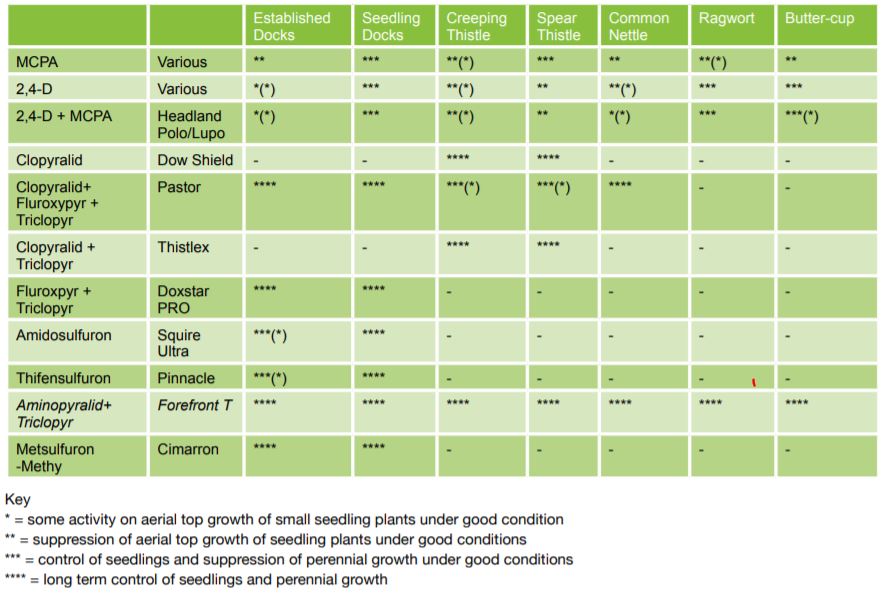 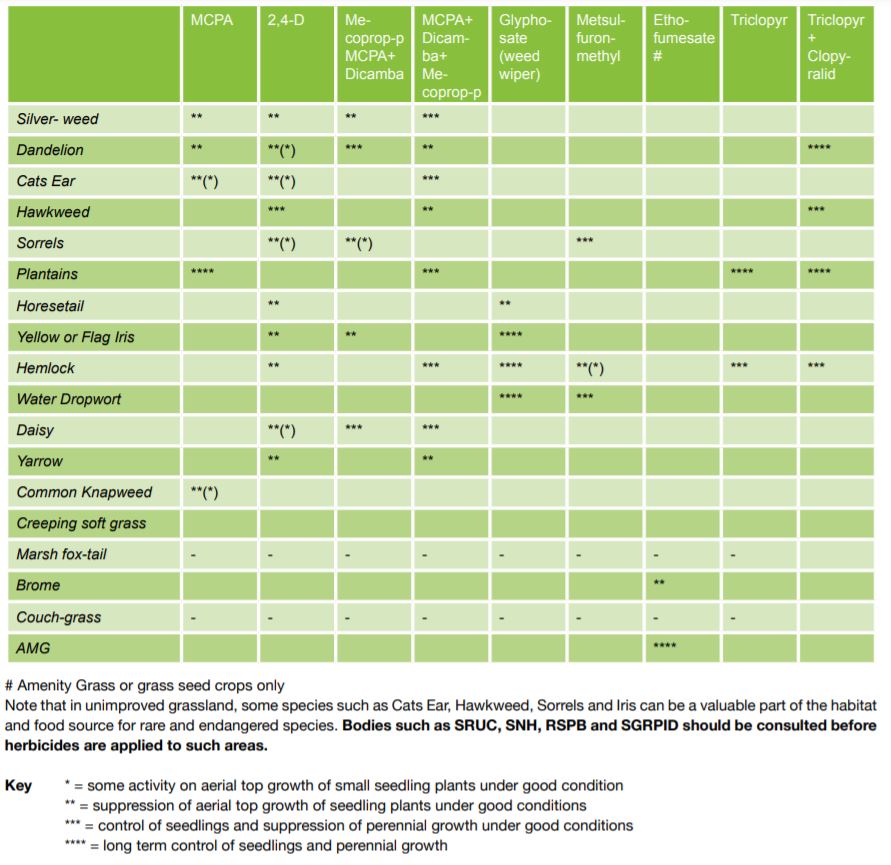 Table 2 Herbicide control of some less common weed in pasture. Note there is not a herbicide solution for all weeds that may occur in pasture. 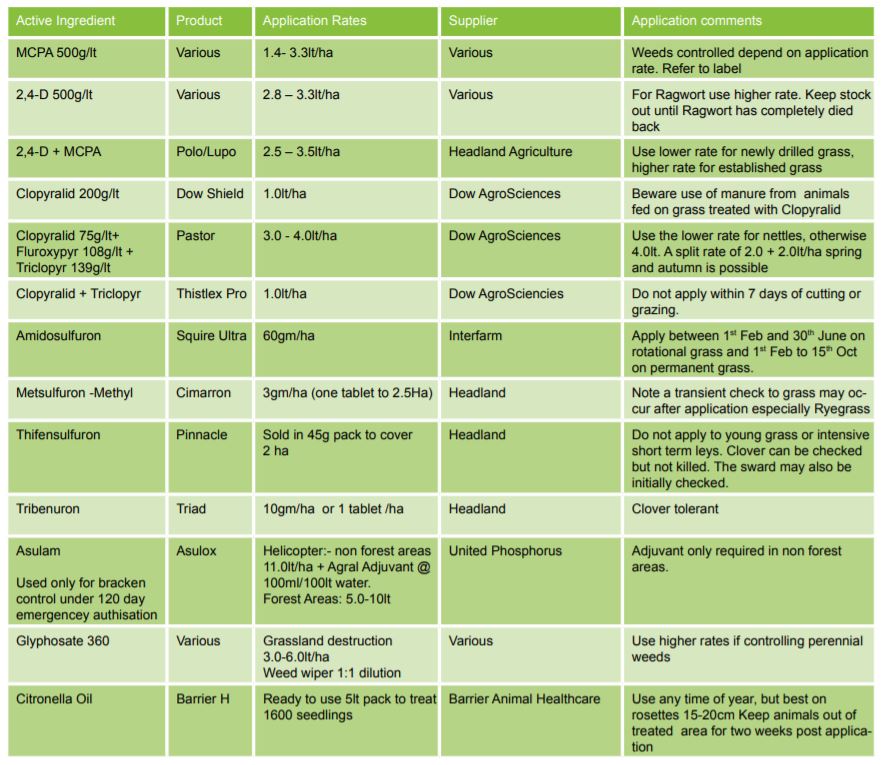